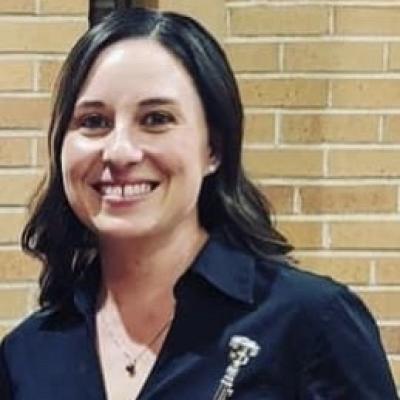 Affiliate Faculty, Trumpet
Rachael Johnston has been playing trumpet for almost 30 years. She began learning from her grandmother when she was six years old. She continued to play, taking lessons and performing with the University of Alaska Anchorage Wind Ensemble while in high school. Rachael studied with Professor Marcellus Brown at Boise State University and earned her Bachelor of Arts in Music Performance in 2008. Rachael also taught choral and instrumental music at Greenleaf Friends Academy in Greenleaf, Idaho, 2009-2012.

While she was studying at Boise State, she played in the Keith Stein Blue Thunder Marching band, and played principal trumpet in both Symphonic Winds and the BSU Orchestra. She won an audition for the privilege of playing a solo for the Boise State University Concerto Aria Competition. She has also performed with the Boise Philharmonic Orchestra, the Boise Baroque Orchestra, Capital Brass Quintet, Treasure Valley Concert Band, as well as several musical theater productions.

Rachael has a passion for partnering with trumpet students to help them unlock the joy and satisfaction that can be found in serious study of the trumpet. She enjoys all aspects of the development process, including practice, chamber ensemble work, and performance. She enjoys seeing students excel in all areas of trumpet performance. She has been teaching private lessons since 2006, teaching all ages and levels. She is currently the trumpet instructor at both Northwest Nazarene University and College of Idaho.
Email