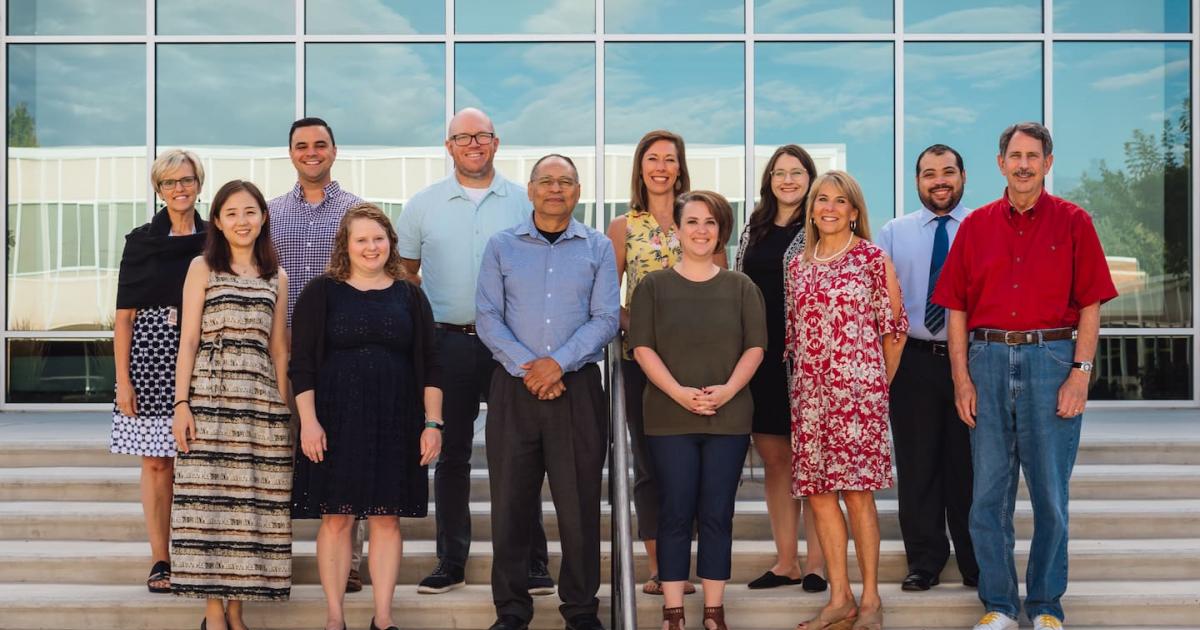 Please join us in welcoming NNU’s new faculty for the 2022-2023 academic year:

Center for Academic Success and Advising

Michaelson earned his BA in Journalism from Point Loma Nazarene University, an MA in English from San Diego State University, a Ph.D. in English from Georgia State University and an M.Ed. in Educational Leadership: Building Administrator from NNU. He has taught Language Arts at the high school level and Writing and English Composition at the college level. He is married to Melissa, an OBGYN nurse, and together, they have three children: Cade, Reese and Duke. Outside of teaching, Michaelson spends most of his time keeping up with his kids’ extracurricular activities. He’s an insatiable reader and obsessive sports fan.

Zickefoose earned her BA in English and English Education from NNU and her MA in Theatre from Southern Oregon University. She has worked in education for over 30 years, including time teaching overseas in South Korea and Ethiopia. She just celebrated her 35th wedding anniversary with her husband George, the principal at Centennial Elementary, whom she met at NNC. Her children are also NNU alums—Alexandra and Korte. The Zickefoose family lived internationally in South Korea and Ethiopia for nearly two decades before returning to Nampa. They love attending live theatre, walking and traveling together.

Liu earned her BA in Music from Yong Siew Toh Conservatory of Music at the National University of Singapore, two master’s degrees in Piano Performance and Literature and Piano Chamber Music from Eastman School of Music and the University of Michigan, respectively, and her Doctor of Musical Arts Piano Performance from the University of Michigan. She has served as faculty at two universities and as a professional pianist, resident artist and instructor. Liu earned many scholarships and awards over her musical career and has performed in prestigious venues, including Carnegie Hall, the Kennedy Center, Shanghai Concert Hall and Hangzhou Grand Theatre. Outside of teaching, Liu enjoys spending time with her cat.

Palacios earned dual bachelor’s degrees in Music Education and Jazz Studies from the University of North Florida, an MA in Jazz Studies and Instrumental Pedagogy and a doctorate of Musical Arts in Saxophone Performance with an emphasis in Jazz from George Mason University. Before coming to NNU, Palacios served in various positions as Assistant Band Director, Concert and Marching Band Technician, Adjunct Professor at George Mason University and as director of Instrumental Music and Jazz Ensemble. With over 15 years of experience performing and teaching in higher education, as well as a wide range of skills with brass instruments, percussion, strings and piano, Palacios has a strong passion for music education and jazz performance. During this time, he has performed in many venues, including Carnegie Hall, recorded albums, filmed a PBS special and toured with musicians from all genres of music. He loves animals and has always dreamed of owning a farm, but currently only has his loyal German Shepherd, Isabella, the daughter of a Police K-9 Unit.

Bodenstab Lee earned her BA in Elementary Education with a minor in Spanish from NNU, an MA in Social Work from Boise State University and is working on her Ph.D. in Educational Leadership in NNU’s Graduate and Professional Studies program. She has served in the NNU Social Work department as an adjunct professor for five years and has worked with LIFE Counseling Center and the Salvation Army Family Shelter. She is married to Kenton, whom she met at NNU during her undergrad years, and together they have two kids, Kenny and Rosie. The Lee family enjoys playing games, reading books, swinging in the hammock and swimming.

Mokhtarian earned his bachelor’s degree in Business Administration from Friends University in Wichita, Kansas, an MS in Adult and Continuing Education and a Ph.D. in Adult Education and Leadership from Kansas State University. His extensive experience working in business organizations gives him real-world experience in the business field. He is married to his wife Marilyn, and together they enjoy road trips, finding out-of-the-way restaurants, time with friends and steam train excursions.

Cornell earned her BA in Elementary Education, her MA in Educational Leadership and her Ed.S. in Leadership and Organizational Development from Northwest Nazarene University. She is currently working toward her Ph.D. in Educational Leadership from NNU and expects to complete it this year. Cornell has been serving in schools as a teacher, vice principal and principal for over 20 years. She has been married to her husband, Loren, for 20 years this December, and they have two daughters, Kaitlyn and McKenzie. During her free time, she enjoys reading a good mystery, shopping with her girls, collecting anything related to Disneyland and planning her next trip there.

Gilbert earned a BA in Elementary Education, an MA in Educational Leadership & Administration and her Educational Specialist degree from Northwest Nazarene University. She was also awarded the L.E. Wesche Outstanding Educator of the Year in 2021 by NNU’s Department of Education. She spent many years in administrative roles within the Middleton and Payette School Districts and has served as adjunct faculty at NNU since 2012. She has been married for 42 years, is the mother of two children, “Grammy” to two grandchildren and owns two golden retrievers. She and her husband dug a waterski lake 40 years ago, which has been their home and training ground for competitive waterskiing. She still skis, competes and hosts tournaments. She loves to “go,” whether to the golf course, hiking, mountain bike riding, traveling or out to dinner.

Van Beek earned her BA in Elementary Education from Boise State University, an MA in Curriculum & Instruction, an Ed.S. degree in Building Administration and her Doctorate of Philosophy from NNU. She has served as the Lake Ridge Elementary principal, an instructor and professor in NNU’s Education Department and as a 5th-grade teacher at West Canyon Elementary School in the Vallivue School District. She lives with her husband Ryan in Boise and they have a nine-month-old little boy named John. They are very close with both sides of their families and enjoy spending time with them.

Álvarez earned his BA in Theology & Biblical Studies from the Spanish American Nazarene Bible College in 1981 and a BA in Business Administration from Inst. Voc. Enrique Díaz de León in 1998. He also earned his M.Div. from Nazarene Theological Seminary and his doctorate of Ministry from Fuller Theological Seminary. Álvarez has served as pastor for over 40 years and is ordained as an Elder in the Church of the Nazarene. He enjoys gardening, reading and cooking Mexican food for family gatherings.

Hahn earned his BS in Social Studies Education from Southern Nazarene University in 2011, an MA and an M.Div. from Nazarene Theological Seminary and a Ph.D. in Theology, Ethics and Philosophy from Boston University School of Theology. Before coming to NNU, he served as an adjunct professor and a graduate teaching fellow at Eastern Nazarene College and Boston University and as an adjunct professor at Nazarene Theological Seminary. Hahn has served in pastoral roles in the Nazarene Church since 2014. He declares that his wife Laura is the funny, witty, warm and athletic one in the family. They have two dogs, Chef and Morton, and like to be outdoors, running, cycling, hiking and camping. They are avid sports fans and enjoy tabletop and role-playing games.

Schmitt earned her BA in Theology with a minor in Christian Education from Southern Nazarene University in 2003, an M.Div. in Biblical Studies from Duke University Divinity School and a Ph.D. in New Testament from Princeton Theological Seminary. She has taught Biblical Studies and New Testament at Trevecca Nazarene University and George Fox University. Schmitt also taught at Princeton Theological Seminary, Renk Theological College and Duke Divinity School as a teaching assistant, teaching fellow, instructor and guest lecturer. She is an ordained elder in the Church of the Nazarene and looks forward to getting involved in a local church. She enjoys traveling and exploring. She is close to her extended family and is aunt extraordinaire to two nieces who live in Arizona.

NNU is excited to welcome each of these individuals as they join a committed group of faculty and staff members dedicated to investing in the academic, spiritual and social growth of NNU students.